Aden Flint opened the scoring with a downward header in the first half and fellow defender Mark Little poked in a second after the break.

It meant Walsall went home empty handed from their first trip to Wembley, while City ended a 12-year wait for a trophy.

Their last silverware came in the same competition in 2003 and the Ashton Gate club went some way to banishing the painful memories of 2008, when they lost to Hull City in the Championship play-off final.

For Walsall, it was their first appearance at the national stadium in their 127-year history and, although they showed moments of promise, they failed to make it count. 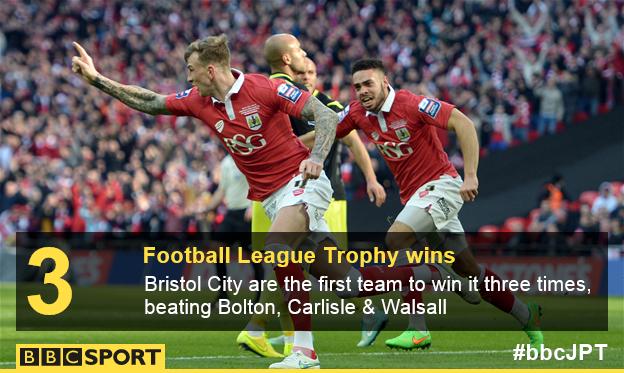 City were more clinical and took 15 minutes to break the deadlock.

Walsall rallied for an equaliser before the break but lacked the finishing touch, as Sam Mantom headed over and Andy Taylor sent a dipping volley just over the bar.

Five minutes after the restart, they fell further behind.

Little, who won the trophy with Peterborough last season, headed towards goal and was denied initially by O'Donnell before touching in the rebound.

The two-goal deficit did not deter Walsall, though, and they broke forward for their best effort of the game as Jordan Cook's cross-shot struck the woodwork.

Bristol City thought they had nabbed a third when Aaron Wilbraham tapped in after a goalmouth scramble, but the offside flag was raised.

The Saddlers scored a late equaliser in their league meeting with City back in October, but this time the Robins saw the game out to lift the cup.

"It's a great feeling. I have to give a special mention to Walsall. They made it a really good game.

"We'd planned and prepared for it very well and the players executed the plan perfectly.

"Whilst you can look at the league tables and think that makes us favourites, it was a tough game.

"It's a start of a lot of the players' careers. They handled the occasion and they won, which is what we came here for."

"I'm disappointed. We didn't perform to our level. Our use of the ball wasn't as good as theirs.

"I'm sure the lads will analyse their own performances. We always knew height would be a factor and they scored from a corner.

"Maybe there was a bit of nerves. They're young lads and they wouldn't have been in front of this crowd before."