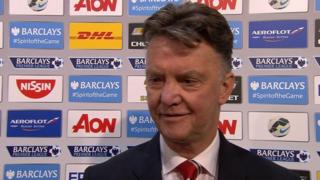 Manchester United manager Louis van Gaal says his side's 3-0 victory over Tottenham was "massive", adding "we had to win" after being knocked out of the FA Cup by Arsenal.

Marouane Fellaini, Michael Carrick and Wayne Rooney scored in an impressive first-half showing as the Red Devils secured a much-needed victory in their pursuit of a top-four place.