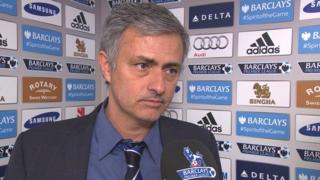 Chelsea manager Jose Mourinho is frustrated his side could only draw 1-1 with Southampton at Stamford Bridge.

Diego Costa gave the Blues an early lead but Dusan Tadic equalised from the penalty spot only eight minutes later.

Despite coming under heavy pressure in the second half, visiting keeper Fraser Forster was in excellent form and the Saints held on for the draw.

Chelsea are now six points clear of second-placed Manchester City but have dropped points in three of their past four home games, having won the previous 10.