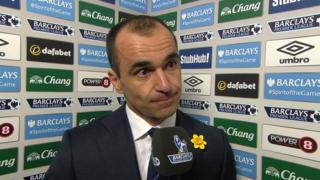 Roberto Martinez praises his Everton side for a "complete" performance as they beat 10-man Newcastle 3-0 to ease their relegation fears.

James McCarthy put the Toffees ahead with his first goal of the season before in-form Romelu Lukaku added a second from the penalty spot.

Newcastle captain Fabricio Coloccini was sent off for a tackle on the impressive Aaron Lennon before substitute Ross Barkley scored Everton's third in stoppage time.

The Toffees have now won five of their past seven games against Newcastle.