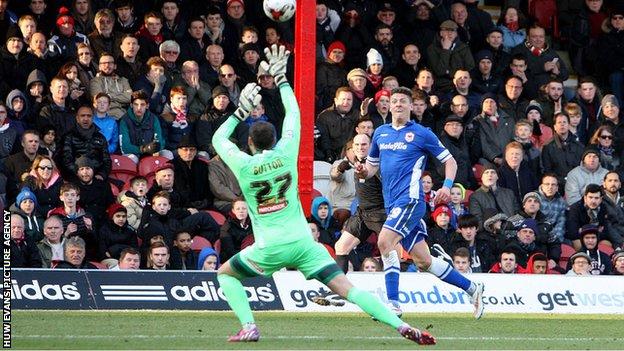 Cardiff City striker Alex Revell hopes his winning goal at Brentford will be the start of a good run of form for himself and the team.

Revell's goal was only his second for Cardiff since joining from Rotherham in January.

"It was difficult when I came in because we were on a bit of a run which rocked us a little bit," he said.

"But the performances recently have all picked up. We've all shown more desire and I think it's now harder to play against us.

"For me that's when I feel I can show people how good I am."

Andre Gray gave the home side a first-half lead, but goals from Federico Macheda and Revell secured the win.

Cardiff ended the game with nine men after after Kadeem Harris and Macheda were sent-off,

"It proves to people we are really committed to the cause. We all want to get it right," Revell said.

"We know it's been a disappointing season to be where we are and we all want to get it right."

"We've just got to keep going. We've come here [Brentford] and proved the point and we've got another big game on Tuesday against a difficult side.

Cardiff next face a Bournemouth side that have beaten them twice this season.

Eddie Howe's side won 3-0 at Cardiff City Stadium in the Capital One Cup in August before a 5-3 league win at Dean Court in December.