"Whether they want that or don't want that, that is the position," said Van Gaal after United's 3-0 win over Spurs. "It is a rat race. They are in it."

City are second, six points adrift of Chelsea after a shock loss to Burnley.

Arsenal are a point further back in third, with United two points adrift. Liverpool are also in the hunt. 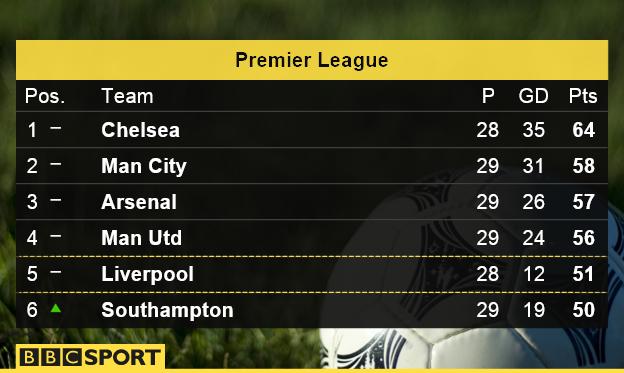 Victory at Swansea City on Monday night (20:00 GMT kick-off) would move the Anfield side to within four of City.

Van Gaal added that a tight battle for the top four was "good for us, good for the fans and good for the media because there will be lots of things to write about".

Van Gaal was delighted with United's win over Spurs, which followed Monday's FA Cup quarter-final defeat by Arsenal, but was hesitant about labelling it their best display of the season.

"We have waited a long time for such a victory and it was better because the performance was good against a very good team," said the Dutchman.

"I was very pleased, but I'm not sure if it was our best. You have to watch it again on video, but we played like a team, very determined after a defeat like we had against Arsenal, that we lost because of ourselves."

The Red Devils scored all three goals in a superb first-half display, beginning with Marouane Fellani's clinical low finish in the ninth minute.

Michael Carrick doubled United's lead with a header, before Wayne Rooney pounced on a mistake by Nabil Bentaleb to score a fine solo effort.

"To do that in a massively important game against a competitor after such a defeat means I'm very pleased with the players," added Van Gaal. "Maybe it is the game that gives us a fantastic boost.

"We are looking step by step and our next game is at Liverpool. I believe it is not so often that United have won at Anfield recently."

The loss to Arsenal left United only fighting for a top-four place, with captain Rooney delivering a pep talk to his team-mates before the game in an attempt to reignite their season.

"I was not in the meeting because the captain has his own privileges," said Van Gaal.

"The players knew this game was massively important, so the captain did something to help the players, help the manager and help the club."