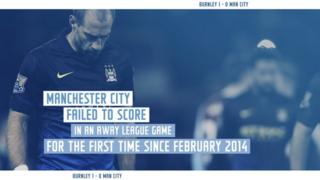 BBC Sport looks at the key stats of this weekend's Premier League action as Manchester City fail to score away for the first time since February 2014.

Southampton have not conceded more than two away goals in the league since the opening weekend.

And Manchester United have only lost two in the last 19 league matches.