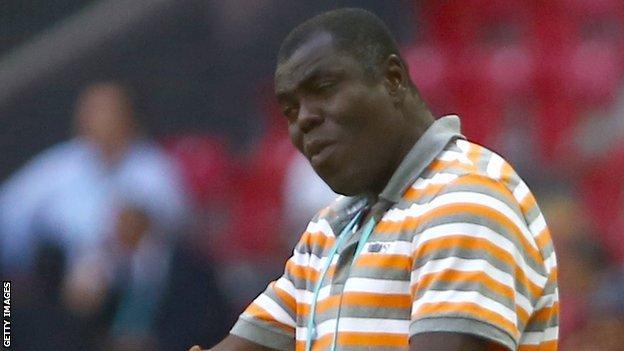 Ghana Under-20 coach Sellas Tetteh believes an African side has a great chance of winning the upcoming World Cup in New Zealand.

Tetteh led Ghana to Africa's first ever Under-20 World Cup title in 2009.

Ghana, Mali, Nigeria and Senegal all qualified for this year's tournament by reaching the semi-finals of the ongoing African Under-20 Championship.

"The four teams have shown quality. They can go as far as winning the World Cup," Tetteh told BBC Sport.

The African Under-20 Championship will reach its conclusion on 22 March.

Nigeria face Ghana in the last four on Wednesday and on Thursday Mali take on hosts Senegal.

Despite already meeting the objective of qualifying for the World Cup, Tetteh gave assurances that his side remain focused on winning the trophy.

"We have the hunger," he insisted. "We are going into the semi-final against our old friends Nigeria. The two are football-loving countries and we want to play good football.

"We are well motivated and committed and we are going to do everything we can to win it."