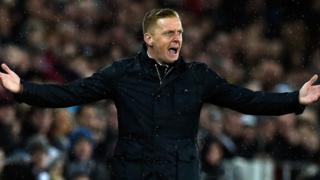 Swansea City boss Garry Monk says it was "an opportunity missed" as his side lose 1-0 at home against Liverpool.

The Reds scored a fortuitous winner when Jordi Amat's clearance deflected off Jordan Henderson and into the net.

Swansea managed only four shots in the second half, while Liverpool had 10.