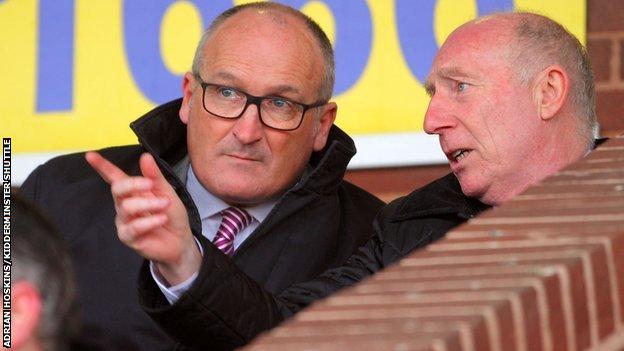 He has worked with current Harriers manager Gary Whild in the past.

"It's about being together and singing from the same hymnsheet," he said.

"Kidderminster Harriers are the biggest club in Worcestershire and you can see the potential for success."

Brown's appointment to the board at Aggborough is a response to the hard-up club's appeal for new investors back in August, and comes at a time when the Harriers need perking up both on and off the field.

Having been forced to prune the budget by allowing several first-team regulars to leave, they have picked up just three points from the last eight games to slip to 11th in the Conference table.

And Whild, appointed a year ago following the sackings of Steve Burr and Andy Thorn in the space of two months, told BBC Hereford & Worcester that he has considered quitting as manager.

"At the moment they're going through a difficult spell," said Brown. "But it's important that we manage the expectations of the club as a whole in its current position and that's what I'm hoping to contribute towards.

"The Kidderminster board approached me as it was felt that I could make a contribution through my combination of football experience and knowledge of owning and running my own businesses commercially.

"Over the next six or seven weeks I will observe the club and speak to all members of staff to get a feel of everyone's roles and responsibilities, compile an overview of all the facets of the club and provide recommendations to the board to help move the club forward."