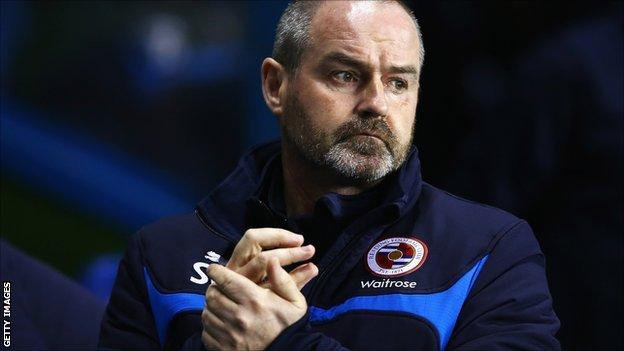 Reading manager Steve Clarke says his side are not going to Wembley just for a "day out" when they take on Arsenal in the semi-final of the FA Cup.

The Royals defeated Bradford 3-0 to reach the last four of the competition.

They now face the holders and one of the Premier League's in-form teams, but Clarke says his Championship side are not going there to make up the numbers.

"We are lucky enough to have a trip to Wembley, not a day out, a trip to play Arsenal," Clarke told BBC Berkshire.

"I promise you we will go there with the best intentions of making the next step, which is the final.

Clarke has now urged his side to replicate the kind of cup giant-killing exploits of Bradford, who knocked out Chelsea and Sunderland on their way to the sixth round.

"In football you never know," he added. "Bradford have been fantastic underdogs. We've taken the baton on and hopefully we can do it in the semi-final also."

Clarke took over from Nigel Adkins as manager at the end of 2014 and even though the club's league form has been poor, he hailed the impact the FA Cup has had on his team.

"When I came to the club in December, I was really, really hopeful I could turn the league form around and get the club up close to the play-offs," he said.

"For various reasons and some reasons I can't even put my finger on, I haven't managed to do that.

"The FA Cup run has been a bonus and you have seen what it means to people."