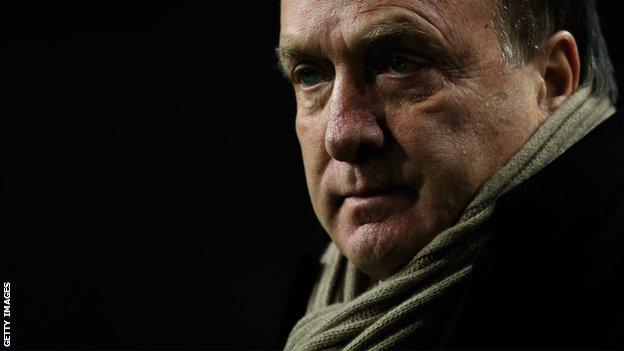 Former Rangers boss Dick Advocaat has taken charge of Sunderland for the rest of the season, tasked with keeping the Black Cats in the Premier League.

They lie one point outside the relegation zone after a run of six league matches without a win.

So what can fans expect of the 67-year-old Advocaat, who has managed the Netherlands, Belgium and Russia as well as clubs like PSV Eindhoven, Rangers and Zenit St Petersburg?

What type of character is he?

"Dick's nickname is 'The Little General'. He is a tough guy, he's always had strict discipline. His discipline has been one of the key things in his coaching style over the years.

"But he's a very human person. He's not a bully, he's very close to his players. That's because he was a good player for a long time himself.

"If you look at their time coaching out there, in a very difficult football culture, I think Dick came out on top.

"Advocaat, like Louis van Gaal and Ronald Koeman, will lay down strong foundations because he believes in his own style.

"He will not change, he will not adapt. He will walk into Sunderland from day one, make it clear to the players and say: 'This is the way we're going to do it, no messing about. If you don't believe in it, get out.'"

"I think Dick is one of the best coaches we have produced over the last 30 to 40 years. He has always been incredibly successful.

"Now, it's kind of pick and choose. Come in as a bit of a Red Adair and sort out a club. He's done it with PSV Eindhoven, he's done it with AZ Alkmaar and now he's going to Sunderland."

"Sunderland fans may not know this, but he was very, very close to joining them five years ago. There was contact."