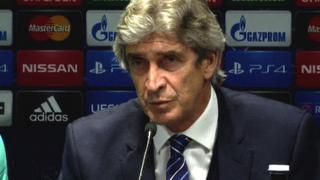 Manchester City manager Manuel Pellegrini says his side must keep 11 players on the field if they are to beat Barcelona and qualify for the quarter-finals of the Champions League.

Barcelona hold the advantage going into Wednesday's match at the Nou Camp after recording an impressive 2-1 victory over 10-man City in Manchester last month.

City have had a man sent off in each of their last three meetings with Barcelona and Pellegrini says his side must play like they did in the second half of the first-leg to have any chance of making it past the last-16 stage for the first time.