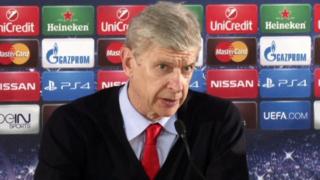 Manager Arsene Wenger is "very disappointed" by Arsenal's Champions League exit to Monaco, but says there were "a lot of positives" in their second-leg victory.

Ligue 1 side Monaco advanced on away goals after beating Arsenal 3-1 at the Emirates Stadium before losing 2-0 at home.

Despite being knocked out of Europe, Arsenal's victory was their eighth in nine games and handed Monaco their first home defeat in 17 matches.