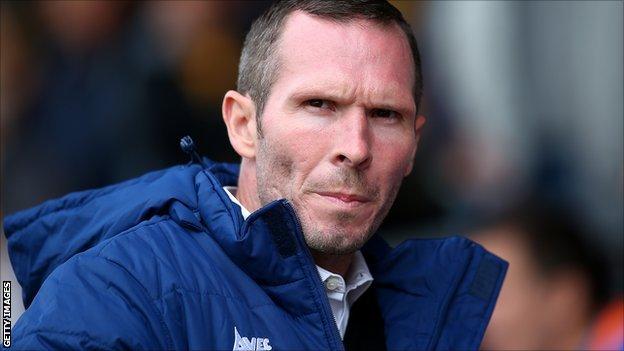 Oxford United manager Michael Appleton has refused to blame his players following their defeat to the Football League's bottom club.

Appleton's side were beaten 2-0 by Hartlepool, slipping back into relegation trouble.

The U's are now just six points above the bottom two and travel to promotion-chasing Shrewsbury on Saturday,

"I feel frustrated but I'm certainly not angry with the players a slightest bit," Appleton told BBC Radio Oxford.

Oxford had been unbeaten in five games and Appleton believes his side still have the quality to remain in League Two.

"If you take all the white noise away I can't fault the effort, attitude," he said. "I can fault the finishing. I can be critical of crosses and passing in the final third but not the effort.

"We have to refocus and move on. We've done well over the past five games, have taken nine points. We're happy with that.

"We will not get carried away or start feeling sorry for ourselves. It is what it is, we'll get on with it and move on.

"It's going to be topsy turvy. We are in control of our own destiny and we will remain focused."