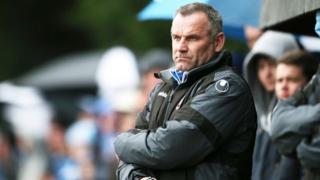 Ballymena United manager Glenn Ferguson hopes his side can continue their Irish Cup heroics by beating Portadown in their semi-final at the Oval on Saturday.

The Sky Blues beat Cliftonville in the sixth round thanks to an injury-time goal from David Cushley, and then saw off Harland and Wolff Welders in the quarter-finals with a strike by Gary Thompson in added time.