In the latest round of Euro 2016 qualifiers England, Northern Ireland, Scotland and Wales maintained their momentum with victories, while the Republic of Ireland salvaged a draw with Poland to stay in the frame.

The five nations have never previously qualified for the same major international tournament but all remain hopeful of reaching next summer's tournament in France.

Why is there such hope? For a start, the finals have been expanded from 16 to 24 teams.

A solid start from all five sides to their qualification groups has also offered encouragement.

Could Wales and Northern Ireland finally play in their first European Championship? Can Scotland compete in a first major tournament since 1998?

With the first half of the qualifying fixtures complete, just how realistic is the prospect of all five making it through to France?

How do you qualify?

There are nine groups and the top two from each will book a Euro 2016 spot, accounting for 18 of the 24 places.

The third-placed side with the most points (discarding those earned against the team finishing sixth in groups as one group has five teams) will also make it.

This leaves eight other teams who have finished third in a group to play off over two legs to provide another four sides. So that's 23, while France qualify automatically as hosts.

So how are the five teams getting on so far? 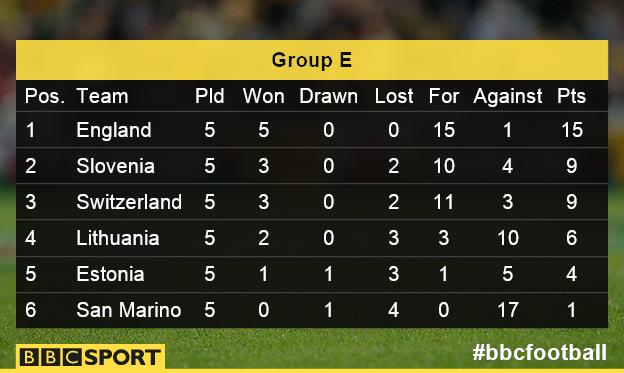 So far in Euro 2016 qualifying: A trip to Switzerland, who took eventual runners-up Argentina to within two minutes of penalties at the World Cup, presented a formidable early test for England, particularly after they went out of Brazil 2014 without winning a game.

But Roy Hodgson's side passed that with merit as Danny Welbeck scored both goals in a 2-0 win in Basel. and he has gone on to be top scorer in qualifying on six goals as England have raced to five wins from five, conceding only once.

A 4-0 victory over Lithuania on Friday was routine but provided Harry Kane with a moment to cherish, with the Tottenham striker scoring his first goal for England 79 seconds into his debut.

The next hurdle: England are six points clear at the top of their group and victory over second-placed Slovenia in June will see them take another big step towards France. Hodgson's team won 3-1 at Wembley in the first meeting.

England captain Wayne Rooney: "Since the World Cup we have been fantastic. A lot of teams around Europe will be looking at this team and will be frightened."

Euro pedigree: England's failure to make the 2008 finals - via a defeat by Croatia forever associated with coach Steve McClaren's umbrella - is the only time they have been absent in the last seven European Championships.

As reigning world champions they finished third in Italy in 1968, and they were also beaten semi-finalists as hosts in 1996 when Alan Shearer finished as top goalscorer.

So far in Euro 2016 qualifying: Scotland emerged from their first qualifier without a point but plenty of positives, pushing world champions Germany all the way before succumbing to a 2-1 defeat.

They have built on that display admirably, beating Georgia and the Republic of Ireland 1-0, either side of a 2-2 draw in Poland - a nation that turned out at the last two European Championships.

On Sunday, Gordon Strachan's side maintained their momentum with a 6-1 win over Gibraltar. Steven Fletcher ended a six-year goal drought with a hat-trick - but only after the visitors had stunned Hampden by equalising.

The next hurdle: A September double-header against Georgia and Germany is on the horizon but before that is the mouth-watering prospect of facing the Republic of Ireland in June. It is a match neither can afford to lose if they are realistic about challenging Poland and Germany for the top two qualification slots.

Scotland manager Gordon Strachan: "I'm upbeat because after five games in a real hard group, to be where we are is not bad."

Euro pedigree: With a team containing the likes of Gary McAllister, Ally McCoist and Andy Goram, Scotland qualified for successive European Championships in 1992 and 1996.

Drawn alongside Germany and the Netherlands, they failed to make the knockout stages in 1992.

Four years later, a 78th-minute goal from the Netherlands' Patrick Kluivert made little difference to an England side already 4-0 up on the Dutch, but meant that Scotland lost out on goals scored.

These are their only two European Championship campaigns, but maybe the Scots have a lucky omen as their last appearance at a major championships was in France for the 1998 World Cup. How they would love a return next year. 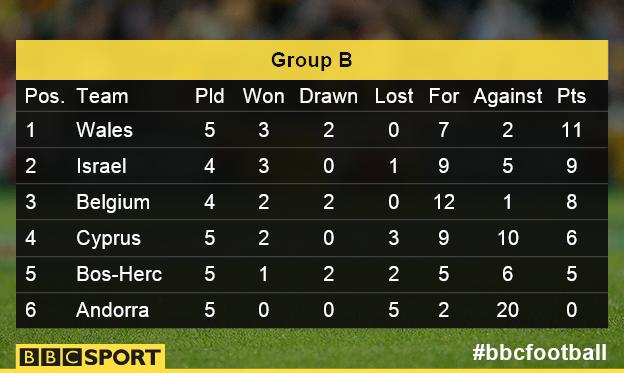 So far in Euro 2016 qualifying: Wales are undefeated with three wins and two draws, having already navigated Andorra's artificial pitch and a visit to group favourites Belgium before Saturday's trip to early leaders Israel.

They came through that latest test with flying colours and now lead Group B. Gareth Bale seems determined to play at a major tournament - the Real Madrid star was instrumental again for his nation in the victory in Haifa.

The next hurdle: The challenge now for Chris Coleman and his team is to keep up the high standards they have set themselves. Next up is a home tie with a talented Belgium team, who many fancied to top the group.

Wales midfielder Aaron Ramsey: "We'll be looking forward to Belgium. It's a tough game but we are full of confidence at the moment. We are top of the group, so why can't we win the game?"

Euro pedigree: Every positive step towards France 2016 is met with glee in Wales as they have not played in a major finals since the 1958 World Cup. Twice they have been within sniffing distance of the Euros, but the finals have so far remained just out of reach.

In 1976, the European Championship consisted of just four teams, with 32 teams in qualifying to take part. Wales progressed through the group stage of qualifying but lost over two legs to Yugoslavia, who went on to host Czechoslovakia, the Netherlands and Germany in the tournament proper.

Twenty-eight years later, there was another two-legged tie and another disappointment, as Russia prevailed 1-0 in the play-offs for Euro 2004 with a second-leg win in Cardiff. 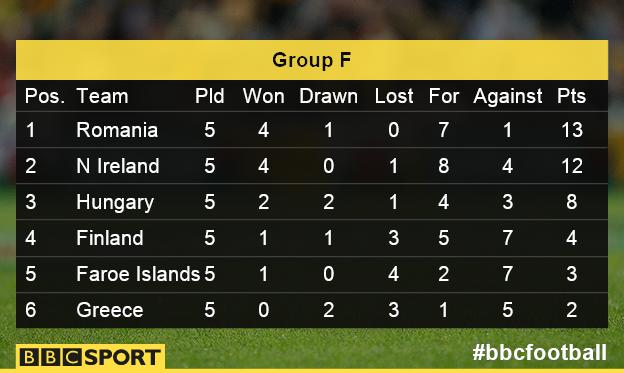 So far in Euro 2016 qualifying: Without a competitive win away from home since September 2010, Michael O'Neill's side may well have taken a draw had they been offered it before kick-off against Hungary in Budapest.

Instead, on the ninth anniversary of a legendary qualifying win over England, Northern Ireland secured another famous victory as Niall McGinn and Kyle Lafferty scored in the final 10 minutes to snatch a 2-1 win.

It proved a springboard for wins against the Faroe Islands and World Cup last-16 participants Greece in Piraeus. Victory over Finland on Sunday kept them in touch with group leaders Romania, who edged to a win over the Faroe Islands.

The next hurdle: Defeat in Romania last time out left Northern Ireland second in the group but O'Neill's side have the chance to atone for that when they meet again on home soil on 13 June.

Northern Ireland manager Michael O'Neill: "Romania are an excellent team and they top the group so we know we'll have to be at our very, very best to beat them."

Euro pedigree: Northern Ireland have never qualified for a Euro finals. They came mighty close in 1984, though, beating West Germany home and away, but were ultimately edged out by the defending champions on goal difference. 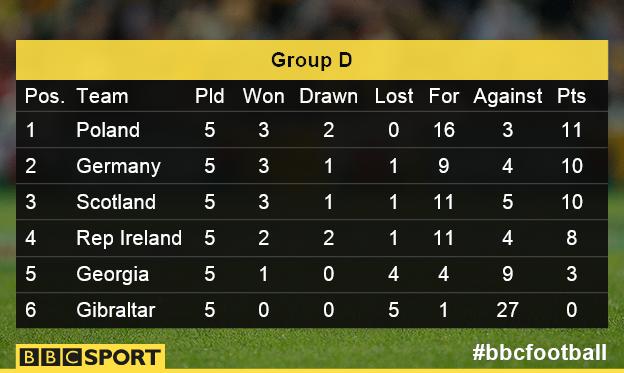 So far in Euro 2016 qualifying: Two wins and a remarkable 94th-minute John O'Shea equaliser at world champions Germany means defeat in Scotland was far from terminal for Martin O'Neill's side.

And they showed good spirit to battle back from a goal down to take a point against Poland on Sunday - a result that leaves Martin O'Neill's side in fourth place, but just three points behind the group leaders.

The next hurdle: The draw with Poland left the Republic fourth in the group and the home match against third-placed Scotland on 13 June looks critical. Four of the Republic's remaining six games will be at home.

Scotland won the meeting between the teams in November 1-0 thanks to Shaun Maloney's strike.

Republic of Ireland striker Shane Long: "It will be between us and Scotland and we can't drop any more points. We need to win our home games and make it a fortress."

Euro pedigree: The highlight of the Republic of Ireland's European Championship history came six minutes into their very first match at the tournament's finals.

Ray Houghton's early strike was the only goal in their 1988 group opener against England. However, a draw against the Soviet Union and a narrow defeat by eventual champions the Netherlands ensured Jack Charlton's men went no further.

The less said about their second finals campaign in 2012 the better - they won no games, scoring only one goal and conceding nine, to finish bottom of their group.