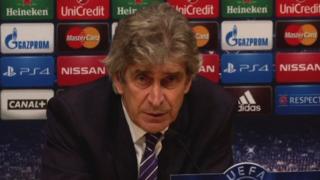 Man City boss Manuel Pellegrini feels his side have improved in the Champions League this season but were unlucky to be drawn against Barcelona.

Barcelona comfortably beat City 1-0 at the Nou Camp to seal City's exit from the competition, but Pellegrini points to the fact they made it into the last 16 as progress.

Pellegrini now wants his side to focus on clawing back the six points they trail Chelsea in the Premier League in the final nine games of the season.

Watch: Everton go 3-1 up in entertaining game with Fulham