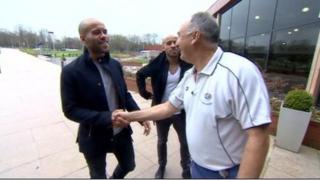 When Walsall run out at Wembley for the Johnstone's Paint Trophy against Bristol City on Sunday, there will be a particularly huge cheer from staff and pupils at one local school in the Black Country.

Saddlers manager Dean Smith went to Dartmouth High School, in nearby Great Barr, now rebranded and rebuilt as the Q3 Academy. So did his assistant manager Richard O'Kelly and three of their players - skipper Adam Chambers and his twin brother James, as well as playmaker Romaine Sawyers. Even chief executive Stefan Gamble and club secretary Dan Mole first did their sums there.

The Chambers brothers returned there, accompanied by the BBC Midlands Today cameras, to meet their old PE teacher, Mr Perrins, and remind themselves how their future was shaped.