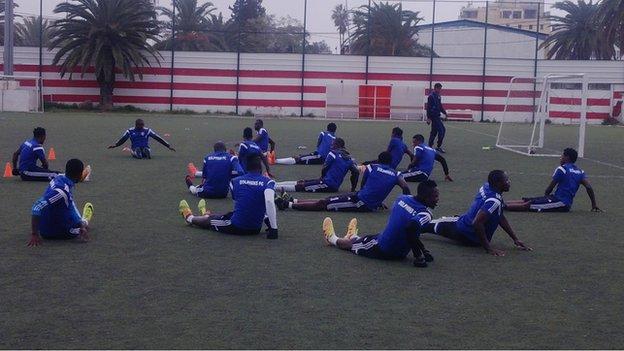 Nigerian side Dolphins have been thrown out of the Confederation Cup.

The disqualification comes after Dolphins failed to arrive on time for Saturday's match with Tunisia's Club Africain, who now go through.

Dolphins missed their flight from Port Harcourt because of a row over players' bonuses and failed to request a postponement of the game.

"If my brain was a computer chip I would delete this week," Dolphin spokesman China Acheru told BBC Sport.

"We should have sorted out our internal issues in time. If we had, we probably would not be in this mess.

"The players wanted an extra $500 per person for the trip. Eventually we agreed on $750 but by the time that was agreed we missed our flight. In the end the players accepted their part of the blame for the situation and they received $600 each.

"It has been a complete waste of time and a week to forget."

The Confederation of African Football wrote in a statement on its website that Dolphins "did not show up at Rades Stadium on Saturday, 14 March 2015 at 15:00 local time, for the kick-off of the match against Club Africain in the 1/16th round first leg of the Confederation Cup".

As a result, "the referee acknowledged forfeiture of Dolphins".

It added: "The club only informed Caf on 13 March 2015 of the fact that it missed its flight between Port-Harcourt and Lagos, and could only arrive in Tunis on the day of the match without requesting for a postponement of the encounter.

"Even though the request was not made, Caf proposed to the Tunisian team to delay the kick-off of the match by 30 minutes for the sake of fair-play.

"If for any reason whatsoever, a team withdraws from the competition or does not report for a match-except in case of force majeure accepted by the Organizing Committee - or if it refuses to play or leaves the ground before the regular end of the match without the permission of the referee, it shall be considered loser and shall be eliminated from the competition."

Caf also attributed blame to the Nigeria Football Federation for not informing the host team and Caf of the date of arrival of the visiting team in the capital of the host country at least two weeks prior to the date of the match.

It added that this contravention "attracts a fine of $2000".

Acheru said the club are disappointed that Caf told them to remain in Tunis to await its decision, which delayed their journey home and meant the club incurred extra costs.

"We were on our way to the airport when Caf said we should go back to Tunis and wait for their decision - we spent three extra days in Tunis for Caf to say we stand disqualified. We had to pay for our bills from Tuesday to Thursday.

"But we will move on and concentrate on the Nigerian league. We will put the saga behind us and we will not be appealing against Caf's decision."