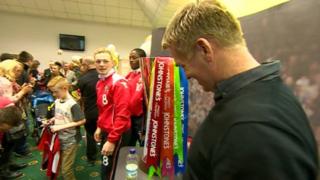 Walsall will take part in the biggest game in their 127-year history when they meet Bristol City at Wembley in Sunday's Johnstone's Paint Trophy final.

Saddlers manager Dean Smith, who began his playing career at Fellows Park way back in 1989, has the honour of becoming the first manager to lead out a Walsall team at Wembley since the old Empire Stadium first opened in 1923.

In front of an expected 74,000 (only Barcelona v Real Madrid is expected to draw a bigger crowd in Europe this weekend), Smith believes they can upset the form book and the odds, and beat the League One leaders and twice former winners.

"You go into competitions all the time to go and win things," Smith told BBC Midlands Today's Ian Winter. "This is a cup final. There'll only be three cup winners this season in England and hopefully we've got a 50-50 chance to be one of them."