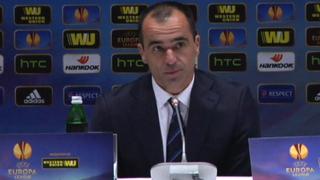 'Defence not to blame for Everton exit'

The Blues surrendered a 2-1 first-leg lead to exit 6-4 at the last-16 stage, with two poor first-half clearances gifting Dynamo key goals on the night.

But, despite the heavy defeat, Martinez feels it was down to "incredible" finishing from Kiev rather than defensive mistakes from his side.