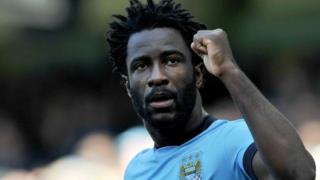 Manchester City boss Manuel Pellegrini says that new striker Wilfried Bony is already becoming an "important player" after his first goal for the club helped City on their way to a 3-0 win over West Bromwich Albion at the Etihad.

Bony's goal came after Baggies defender Gareth McAuley was controversially sent off for West Brom, and City then went on to add two more through midfielders Fernando and David Silva.

Former Swansea forward Bony has now scored against 16 of the 22 Premier League sides he has faced, and his first City goal came on his new manager's 100th game in charge in all competitions.