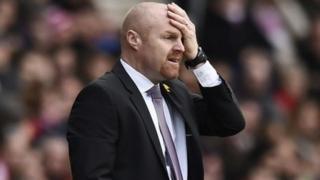 Burnley manager Sean Dyche is left ruing "really good" missed opportunities from his strikers and a "disappointing" lack of a penalty award following his side's 2-0 defeat to Southampton.

Shane Long's third of the season and an own goal from Burnley defender Jason Shackell proved enough on the day, but Saints substitute goalkeeper Kelvin Davis was required to make saves from both Sam Vokes and Danny Ings with the score still at 1-0.

The Clarets have now picked up just eight points from 15 Premier League away games this season, losing nine along the way.