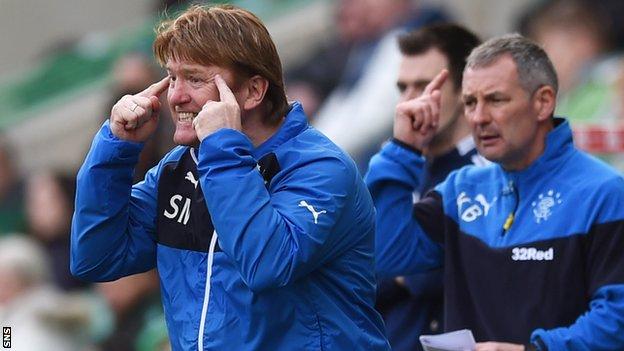 Rangers manager Stuart McCall insist there is a "long way to go" following his side's 2-0 win over Hibernian at Easter Road.

The victory was McCall's first since taking charge at Ibrox, ending a run of five straight draws.

"Today was good, but because of what's happened in the past, we've still got a long way to go," he told BBC Scotland.

"A result, a performance like that can only help the confidence which has been low."

Victory sees Rangers narrow the gap on second-placed Hibs to three points with a game in hand.

Goals from Lee Wallace and Kenny Miller guided the visitors to victory, as McCall's men, employing a 3-5-2 formation, frustrated the hosts.

"It was a good performance, there were lots of good individual performances but in a team unit," he said.

"I'm just pleased with all-round effort and desire of the players. It's a really good move the first goal - we've got one wing back scoring, the other wing back's in the six-yard box making a challenge on (Lewis) Stevenson for it to fall.

"A lot of ability and quality in there as well, I thought at times we played good stuff.

"It was fantastic to see supporters who have been through a lot celebrating like that.

"They had good bits of movement, they've got good players, Scott Allan in there was terrific at times. But we'll just look after ourselves.

"That's the standard we've set now, we can't fall below that. People will talk about wanting to keep the jersey, a lot of players there put in an impact, but they've got to do it week in, week out. It's a starting block."