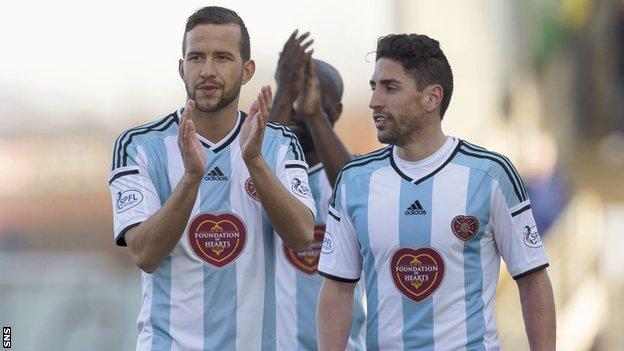 Hearts have secured the Scottish Championship title - returning to the top flight after one season.

Neilson had stated his preference for his side to secure the title in front of a home crowd at Tynecastle.

Hearts tweeted: "Championees you beauty. Congratulations to everyone connected with the club, especially our fans #wedidittogether"

The Edinburgh club have lost only one of their 29 league games this season and, speaking before clinching the title, Neilson said his players were prepared to work hard for their success.

"As a coach, you just want guys who are prepared to work hard to make the best of their ability, and we definitely have that," he told his club website. "All the coaches and I can do is prepare training, and hope the boys buy into it, which they all have done.

"Even when we've won the league, it's important that we continue to win games. We have to play Hibs and Rangers, and it's vital for us to beat these sides.

"Our mindset is that we must win every game, a club of this stature must not accept less."