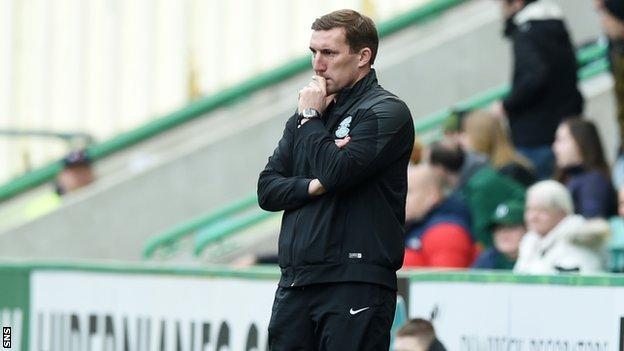 Alan Stubbs insists Hibs should have been awarded a foul before Rangers' second goal in the loss at Easter Road.

The Hibs boss believes Lee Wallace fouled Paul Hanlon before Kenny Miller made it 2-0 to the visitors.

"We were starting to come into the game and, unfortunately, a very, very poor decision has altered the course of the game," Stubbs told BBC Scotland.

Hibs fell behind to Lee Wallace's strike just before half time before Miller added a second.

Stubbs said referee Willie Collum should have awarded a foul for Wallace's challenge.

"Everyone in the stadium could see it was a foul," Stubbs added. "There's no way you can dress it up - it was a foul - Paul was caught after he cleared the ball and in the laws of the game it was a foul.

"It spoiled the game, although obviously not from Rangers' point of view. We were on top at the time and had Rangers pinned back.

"We weren't necessarily creating clear-cut chances but the momentum was building and it was a huge blow to be stopped in our tracks like that.

"However, it won't affect our season or what we want to do. We move on."