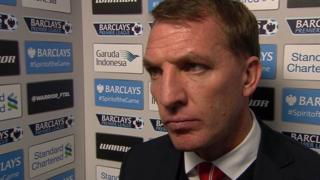 Liverpool boss Brendan Rodgers believes his side can still finish in the top four of the Premier League, despite losing 2-1 to rivals Manchester United at Anfield.

Juan Mata scored twice to give United the win, slotting home in the first half and producing a stunning scissor kick to double his team's advantage. Liverpool had substitute Steven Gerrard sent off in the second half, and Daniel Sturridge pulled a goal back for the Reds.

Liverpool are the final English league team to lose a league match in 2015.