The ex-Liverpool striker, 28, drilled in the winner as the Spanish leaders beat title rivals Real Madrid 2-1.

"Very few players can score a goal like he did, and that is why we signed him," said Enrique after the Nou Camp win.

Suarez added: "It is my most important goal for Barca. It has extra meaning given the opponents it was against."

The Uruguayan, who arrived in a £75m deal last summer, struck in the second half to move Barca four points clear of their arch-rivals Madrid with 10 matches left.

"He can decide games. He's a pure scorer, who needs very little to finish," added Enrique.

"This was a nice win tonight and something for the fans to enjoy. But although it was important, it was not decisive.

"We are where we wanted to be, but we can't relax because we could drop points in any game."

European champions Madrid had held a four-point advantage of their own over Barcelona on 27 February.

Carlo Ancelotti's side equalised in Barcelona through Cristiano Ronaldo in the first half, cancelling out French defender's Jeremy Mathieu's header.

But Suarez's 14th goal in all competitions hands the initiative to the Catalan club, who are aiming to regain La Liga following Atletico Madrid's triumph last season.

"There is still an eternity to go and also we have the Champions League to think about. It would be a mistake to take anything for granted," said Barca midfielder Javier Mascherano.

"Against a team like Madrid you always have to give your all as they push you to the limits both physically and mentally.

"We put a lot into this game especially when you consider we played in midweek against Manchester City." 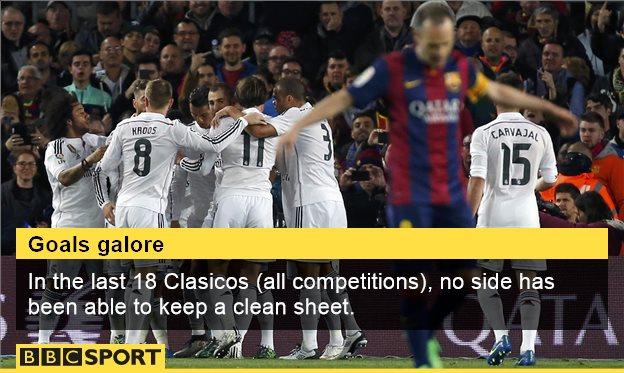