Defender Mark Little says joining Bristol City last summer was the best decision he has ever made.

The 26-year-old left Peterborough for Ashton Gate last June, signing a three-year deal with the League One leaders.

Little scored the second goal in Sunday's Johnstone's Paint Trophy win over Walsall to lift the cup for the second consecutive season.

"I can only stand here and talk about how positive this season has been," he told BBC Points West at Wembley.

"It's the best decision I've ever made, coming here, and I have to say thank you [to the manager] for bringing me here."

As well as claiming their first piece of silverware for 12 years, Bristol City are also 10 points clear at the top of League One. 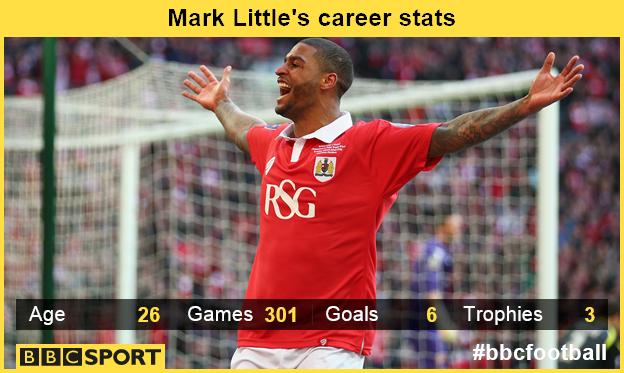 "This year has been so good," Little added. "We just need to finish the job off and then I can go on my holidays and look back at what an amazing season it's been."

Little started out at Wolves and had loan spells with Northampton, Chesterfield and Peterborough, before joining Posh in a permanent deal in 2010.

He made 176 appearances for the Cambridgeshire club, but turned down a new deal in order to join Bristol City.

The right-back has now played 41 times for Steve Cotterill's side, and his goal at Wembley was only his second of the season.

"I'm lost for words. It hasn't sunk in. In a few days I'll still be dreaming," Little said of his goal, which followed Aden Flint's opener.

"It was a great team performance. Perfect, really.

"When I woke up in the morning I was hoping to lift the trophy again. To get man of the match and score as well is a dream come true."