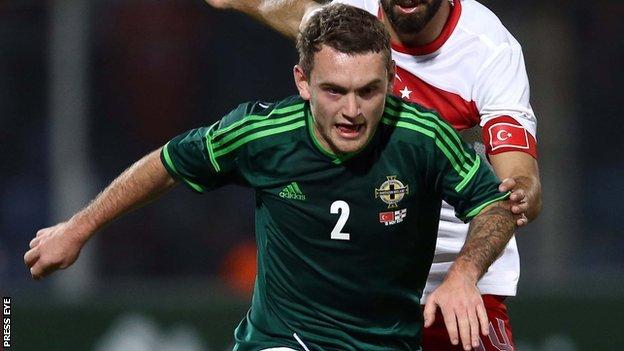 Lee Hodson has been called into the Northern Ireland squad for the friendly against Scotland and the Euro 2016 qualifier against Finland.

The MK Dons defender replaces Dundee United midfielder Paul Paton who has withdrawn because of a knee injury.

Michael O'Neill's side face the Scots at Hampden Park, before taking on the Finns at Windsor Park on Sunday.

Clingan and Ferguson have also been ruled out of the double-header with knee injuries.

Kilmarnock midfielder Clingan and Newcastle defender Ferguson were named in a 27-man squad for the two fixtures.

Ferguson is currently on loan at Rangers and Ibrox manager Stuart McCall was surprised by his inclusion in the original squad announced by manager Michael O'Neill.

The 23-year-old joined the Scottish club in January but has not played for the team because of his injury.

"From what I've been led to believe, we won't see him at all this season," said McCall.

Ferguson missed November's defeat by group leaders Romania because of injury and he was one of three players to return to the squad for the two games later this month.

Lafferty, who is on loan at Rotherham United, fills the void left by the absence of Ferguson.