Bournemouth manager Eddie Howe hopes their victory over Middlesbrough on Saturday will give them a "psychological boost" in the race for promotion.

The Cherries beat Boro 3-0 to return to the top of the Championship table.

With seven games left, Howe's side hold a one-point lead over Watford and Boro.

"Psychologically it gives us a boost knowing we've beaten one of the best sides in the division," Howe told BBC Radio Solent.

"It should serve us well hopefully in the remaining games." 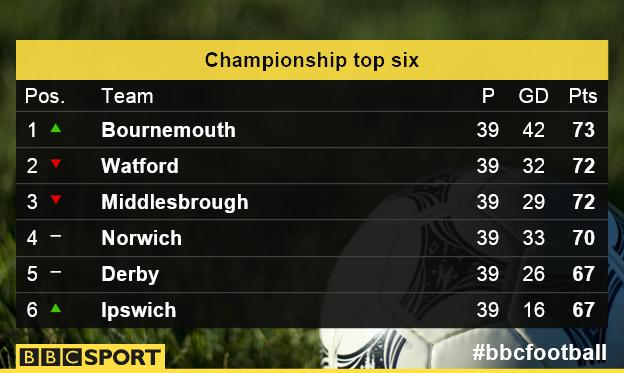 Howe says he is unconcerned with their lead at this stage, with the manner of Bournemouth's performance the most pleasing aspect, as Boro failed to muster a single shot on target and were outplayed by the Cherries.

"That's as well as we have played when you consider the opposition we were up against," he added.

"We defended very well and limited them to half-chances and with the ball we were excellent. We fully deserved the win.

"I don't think we were threatened. I don't think Artur (Boruc) really had a save to make and our back four were excellent and very well protected.

"From a long way out we've been aiming to improve our record against the top sides. We haven't always got what we deserved and haven't always produced the type of performances we have been looking for, but we did that on Saturday.

Howe added: "I don't care if there are gaps appearing or not. I only care about our performances and trying to win as many games as we can. If gaps appear off the back of that, then great.

"I can only reflect on that performance and be very proud of the team."

Captain Tommy Elphick admitted that defeat by Boro could have ended their automatic promotion hopes and feels Saturday's performance has sent out the perfect message.

"A lot was made of the game beforehand," he said. "We all knew how big it was and, in all honesty, if we had been beaten we'd be looking at the play-offs rather than the top two.

"It's a big statement and the lads are buzzing, but we need to contain it for a tough game against Ipswich."

Meanwhile, Cherries striker Callum Wilson has withdrawn from the England Under-21 squad with a knee injury.