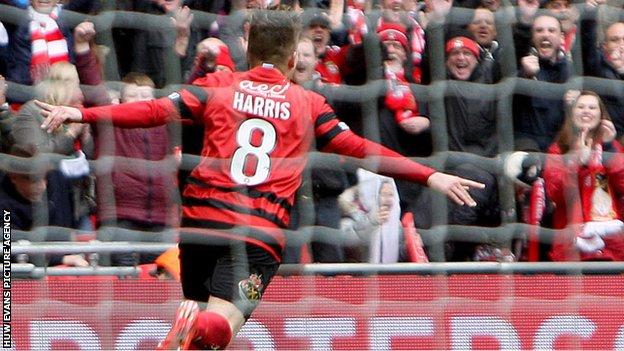 Playing for the first time since the sacking of manager Kevin Wilkin, the Dragons were good value for the lead.

But the Whites' Nicky Deverdics missed a golden opportunity to claim all three points for the visitors in added time.

Wrexham, with coaches Carl Darlington and Michael Oakes in charge, showed two changes from the team that just 48-hours earlier had lost the FA Trophy final in a penalty shoot-out against North Ferriby United.

And it told after the second half as Dover - unchanged from their 1-0 win over Telford - had a bigger share of possession.

Dover stay in 10th place in the table, while Wrexham remain 15th.

Wrexham caretaker manager Carl Darlington told BBC Radio Wales: "It was a very difficult position to be in for myself and for the players.

"We've gone through 120 minutes of the Cup final and then had to play another game within 48 hours [so] it was very difficult for the players, and between all of that we've had the manager leaving and the assistant manager leaving.

"So we wanted a reaction from the players and I'm more than positive that we got that today, although the result was one-all, I can only commend the players after what they've come through physically and mentally."