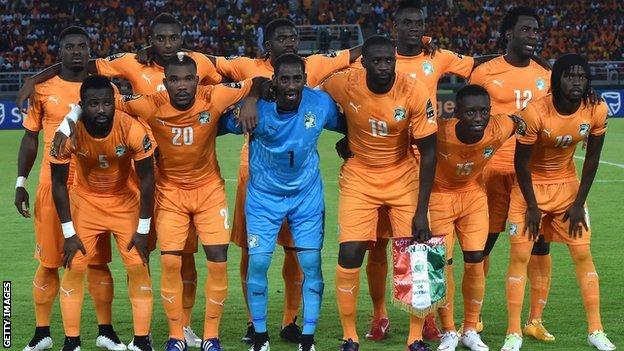 Goalkeeper Boubacar Barry and defender Kolo Toure will mark the end of their Ivory Coast careers in this week's friendly matches.

Both players retired from international duty after helping the Elephants win the Africa Cup of Nations this year.

But they are in the squad to face Angola in Abidjan on Thursday and away to Equatorial Guinea on Sunday.

It means Barry and Toure can say farewell in front of their own fans at the Felix Houphouet-Boigny Stadium.

Barry was the star of the penalty shootout victory in last month's Nations Cup final and Toure also had a fine game in central defence.

The pair were given honorary places in a 28-man selection that includes all of the winning from the tournament as Ivory Coast uses the games to celebrate its success.

That means Manchester City pair Yaya Toure and Wilfried Bony and Roma star Gervinho will also travel for the friendlies.

Elsewhere, losing Nations Cup finalists Ghana have set up two tough games for the international window - against Senegal and Mali in France in four days. Those teams have both reacted to poor African Cup campaigns by firing their coaches.

Former national team captain Aliou Cisse is now in charge of Senegal, while Alain Giresse left to return for another spell as Mali coach.

Cisse's biggest decision in his first Senegal squad was to recall former Chelsea striker Demba Ba, who was left out for the African Cup by Giresse.

For Ghana, the games give coach Avram Grant a chance to start planning for 2017 African Cup qualifying - the next mission for the continent's teams - after he had barely a month to prepare for this year's tournament. Qualifying for the 2018 World Cup in Russia then starts in October.

Top-ranked African team Algeria has games against Qatar and Oman in Doha, while Tunisia travels to China and Morocco will face Uruguay at home on Saturday.

Morocco were thrown out of the 2017 and 2019 African Cups after declining to host this year. The Moroccans have said they will appeal against the ruling.

Nigeria have a hastily-arranged game against Uganda on Wednesday after Bolivia pulled out over fears over an attack by Nigeria's Boko Haram extremist group. Nigeria said Bolivia "chickened out'' and the Nigerian Football Federation indicated it will take legal action against Bolivia through Fifa for breach of contract.

Goalkeeper Vincent Enyeama has a chance to make his 100th appearance for Nigeria if he plays against the Ugandans or against South Africa on Sunday.

After another disappointing tournament, four-time African champions Cameroon's matches away in Indonesia and Thailand have led to more criticism of the team and the national federation, which is still being controlled by a normalization committee set up nearly two years ago in the absence of proper football elections.

"How can a country like Cameroon pick such football nonentities for international friendlies?" Milla said.

In other games, surprise African Cup semi-finalists Congo play Iraq in the United Arab Emirates and 29-year-old Johnny McKinstry, one of the youngest coaches in international football, takes charge of for the first time against 2012 African champion Zambia.

Egypt, still wary of the threat of violence at football games at home after a deadly stampede last month, meet Equatorial Guinea in neutral Morocco on Thursday.