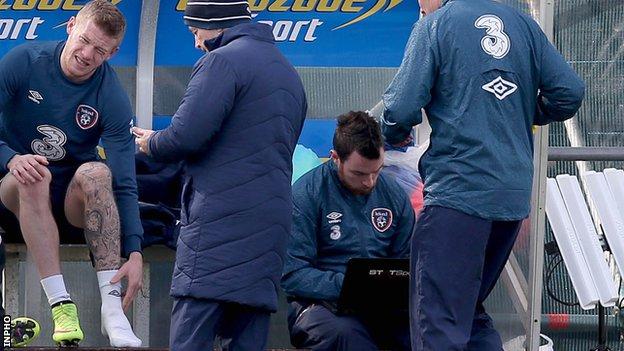 Republic of Ireland manager Martin O'Neill could face an anxious wait over the fitness of James McClean.

The 25-year-old Wigan midfielder limped out of Tuesday's training session in Malahide near Dublin and was taken for a scan on his left ankle.

O'Neill said the scan was precautionary and expected the former Sunderland man to be available for Sunday's key Euro 2016 game at home to Poland.

"He was just feeling it a little bit. We will see how he is," said O'Neill.

"It didn't happen in training. He felt a little bit sore after yesterday. He thought it might go away, but it's just a bit of a pain across the ankle."

O'Neill will be desperate to have McClean fit for the clash with the surprise Group D leaders with fellow wide-man Aiden McGeady having not played for Everton since January.

McGeady has recovered from his knee problem but is short of match fitness.

O'Neill, who first worked with McClean during their time together at Sunderland, said he had yet to decide on his team for what could prove to be a pivotal game in the campaign.

But he accepted former Derry City player McClean had become an important player for him.

He said: "James has played exceptionally well for us in most of the games since I have been in charge.

"Obviously I know him quite well - very well, in fact - and yes, he is a good player for us."

O'Neill also has concerns over Burnley full-back Stephen Ward, who was due to undergo a procedure to remove screws used to repair an ankle injury on Monday, while striker Jonathan Walters trained wearing a mask to protect the fractured cheekbone he had repaired recently.

Everton midfield duo James McCarthy and Darron Gibson have been nursed through the early part of the week after their exertions on club duty, while skipper Robbie Keane and new squad member Bournemouth's Harry Arter have now joined up with the rest of the party.