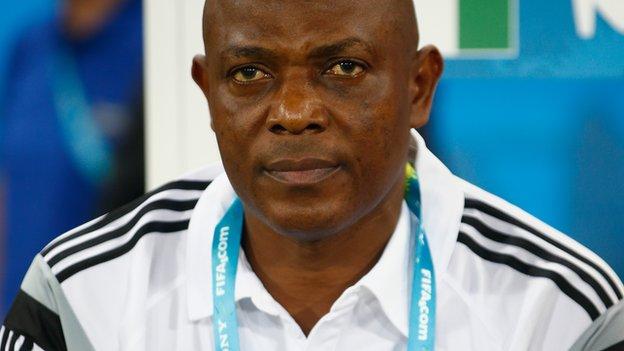 The 53-year-old, who initially took charge of the team in November 2011, has been offered a new two-year deal.

His previous contract ran out after last year's World Cup in Brazil, where Nigeria reached the second round stage.

During his first spell in charge, Keshi won the 2013 Africa Cup of Nations.

"The NFF executive committee met on Wednesday and finally approved the recommendation of the technical committee for Keshi to continue as the country's coach," said Pinnick.

"We believe he deserves to continue and we expect him to sign this new contract in the coming days."

BBC Sport understands that Keshi has been tasked to meet several targets and that the deal will be off if he does not agree.

He is also required to sign a code of conduct and expected to work in line with the NFF technical committee.

Keshi, who won the Nations Cup as a player with Nigeria in 1994, declined to comment when contacted by the BBC.

Debate has raged in Nigeria, who were beaten 1-0 in a friendly by Uganda on Wednesday, over whether the former international should be given a new contract.

Despite his World Cup and Nations Cup feats, he failed to qualify Nigeria for the recent Africa Cup of Nations in Equatorial Guinea.

"We all need help to excel in what we do and Keshi will get all the support he needs to succeed with the team," added Pinnick.

As caretaker coach he endured a turbulent 2014, in which he was sacked by the NFF and only reinstalled after intervention from Nigeria President Goodluck Jonathan.