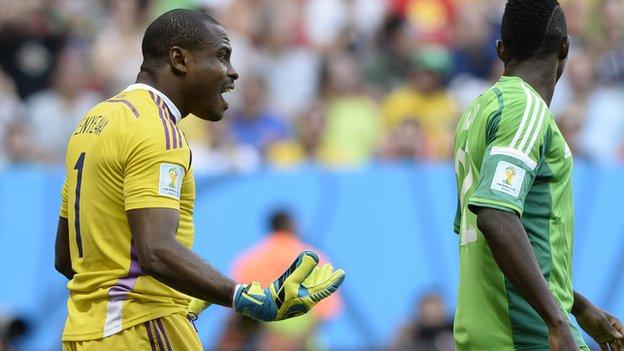 Goalkeeper and captain Vincent Enyeama became only the second Nigerian to win 100 caps but his celebrations were spoilt as Uganda won 1-0 in Uyo.

The southern city is where Enyeama hails from but his night was soured when Farouk Miya's close-range shot deflected in nine minutes from time.

Enyeama, who was presented with a trophy before the match, joins Joseph Yobo on 100 caps for Nigeria.

He can beat that record when the Super Eagles play South Africa on Sunday.

After the match, Nigeria Football Federation president Amaju Pinnick was highly critical of the Super Eagles squad, which was led by caretaker coach Daniel Amokachi.

"We are supposed to be celebrating with Enyeama on his 100th cap, but your poor performance has ruined the party and Nigerians are very angry," he told the players after the game.

"When next you receive an invitation letter to come represent Nigeria, you have a critical decision to make: accept it only if you believe you are in the frame of mind to give your everything or decline if you do not feel that way.

"The camp of the national team will no longer welcome average players or good players with poor attitude."

Frenchman Alain Giresse was back in charge of Mali - who he guided to third place at the 2013 Nations Cup - for the first time since leading Senegal at this year's finals in Equatorial Guinea.

Thulani Hlatshwayo celebrated captaining Bafana Bafana for the first time by opening the scoring, with debutant Thabo Mnyamane and Mandla Masango also finding the net for the visitors.

The match marked the return to the starting line-up of controversial South Africa midfielder Thulani Serero from Dutch club Ajax.

He was left out of this year's Nations Cup by coach Ephraim 'Shakes' Mashaba after snubbing a pre-squad announcement training camp.

The first game of the day on Wednesday came in Indonesia where Cameroon, who finished bottom of their Nations Cup group without a win, bounced back with a 1-0 victory.

Porto striker Vincent Aboubakar slotted home after 35 minutes to earn the Indomitable Lions a win in a fixture that 1990 World Cup legend Roger Milla had called 'humiliating' given Indonesia's Fifa ranking of 156.

Burundi equalised twice to draw 2-2 in Mauritius and prevent French coach Didier Six celebrating his debut in charge of the Indian Ocean islanders with a victory.

A 2-0 home win for Botswana over fellow southern Africa nation Lesotho completed a six-friendly schedule designed to prepare teams for the June kick-off of the 2017 Africa Cup of Nations qualifiers.