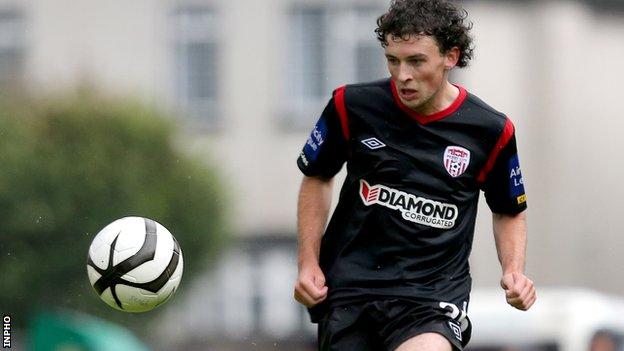 Derry moved up to fifth in the Premier Division thanks to this comfortable win over the Drogs at the Brandywell.

Anthony Elding netted his first goal for City on his home debut with a stooping header on eight minutes.

It was a scrappy affair and Barry McNamee's volley into the top corner was a rare moment of quality.

Drogheda's Jason Marks was dismissed for handball with 14 minutes left and Elding converted the resulting penalty to seal a second league win for Derry.

Gerard Doherty was making his 300th appearance for the Candystripes but he was nearly caught out for the second time in three days early in the game.

Greg Bolger sent a long-range effort over Doherty and into the net for St Pat's in midweek but the City keeper got back in time to keep out a similar attempt from Cathal Brady.

The action switched to the other end and Elding got in front of his marker to head in the opener from Mark Timlin's cross.

McNamee celebrated his 100th game for Derry in style, capitalising on poor defending to double the lead five minutes from half-time.

City midfielder Patrick McEleney flashed a shot wide early in the second half and Timlin blasted over after being slipped through by Joshua Daniels.

The visitors rarely threatened although Daryl Kavanagh went close when his curling strike flew just over.

Marks was shown a straight red-card when his handball prevented a goalscoring chance for Daniels at the back-post.

Elding slotted home the spot-kick to complete his double as Derry moved up three places in the standings.