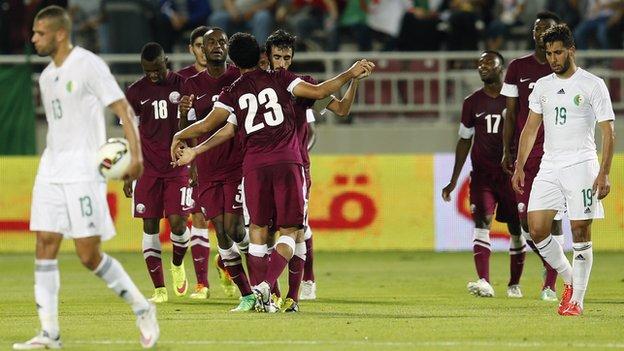 Algeria lost their first game since exiting the Africa Cup of Nations in the quarter-finals, losing 1-0 to Qatar in a friendly in Doha on Thursday.

Ali Assadalla scored a superb goal after 32 minutes, as he dribbled past several players prior to a calm finish.

Qatar threatened several times in the first half, and the visitors dominated the second but rarely looking like finding an equaliser.

The closest they came was a volley from substitute Ishak Belfodil.

Diarrassouba Viera scored in the first half, before Salomon Kalou struck deep into the second as Ivorian fans had a chance to celebrate their second African crown.

It was also a chance to say farewell to stalwarts Kolo Toure and Boubacar Barry, who were in the squad to say goodbye.

They retired after finally winning the trophy at what was both players' seventh Nations Cup appearance.

The Pharaohs left it late though, as Bassem Morsi and Mahmoud Hassan scored in the closing minutes.

On Friday, The Gambia play Mauritania while Tunisia take on Japan.