Former Scotland striker Billy Dodds believes the Euro 2016 qualifier against Gibraltar should not be a significant obstacle for Scotland.

Gordon Strachan's side are level on points with Germany and three behind leaders Poland in Group D.

"This game isn't really a test," he said. "It's a game we should be winning comfortably with the form we're in.

"It's not being disrespectful to say it's a case how many we can score, not if we win."

So far, Gibraltar have conceded 21 goals in their four qualifying matches, while Scotland are on a high after beating Northern Ireland 1-0 in a friendly on Wednesday. 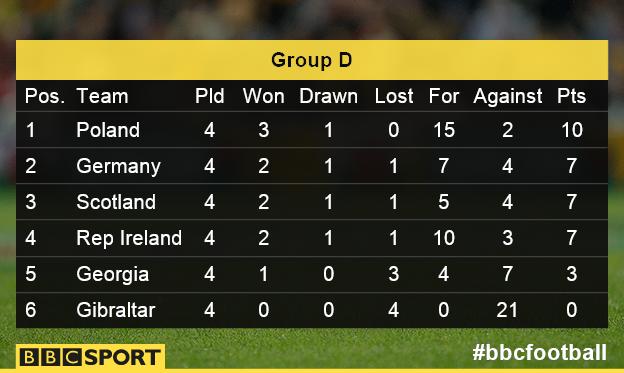 "I'm not expecting double figures but we should win by at least three goals," said Ross County assistant manager Dodds.

"We've now got teams like Northern Ireland being forced back by us in a game where we had the bulk of possession.

"They didn't manage a shot on target, yet Michael O'Neill's side have proven in their qualifying campaign that they're no mugs.

"That tells you the job Gordon Strachan has done and the confidence within the squad right now.

"It may have taken a late goal to see off Northern Ireland but they have better defenders than Gibraltar.

"You look at Jonny Evans and Paddy McNair, both at Manchester United. Good players at a good club. Of course we may be struggling to break them down.

"We just might have to be a little patient on Sunday."

Dodds recalled a home World Cup qualifier against San Marino in 2001 as a similar test, in which Scotland ran out comfortable 4-0 winners.

"I scored a goal and hit the post but was disappointed that I didn't get two or three," he said.

"At home in a game like this, it's about how quickly you break them down and get the first goal.

"In the away match, we got into trouble. Kevin Gallacher and I missed lots of chances and it was two late goals to win 2-0.

"It got too close for comfort and we let the pressure build. That shouldn't happen at home but the pressure can build if you're 0-0 at half-time.

"The key is to not add pressure on to ourselves.

"Gibraltar is a good game for the players to play in. That's the mind-set the players will have.

"They've handled pressure games like Georgia and the Republic of Ireland. Those were nervous games to play in. This one is largely pressure free."

Some fans would see this game as an opportunity to be more offensive, possibly starting with two strikers, but Dodds believes sticking to previous tactics may pay dividends.

"I don't expect Gordon to either tinker with the formation or stray too far from the boys that have done the business," added Dodds.

"Why change it for change's sake even though it is Gibraltar?

"We've had five around the midfield area in a couple of systems supporting a lone striker.

"Sometimes it's better to have runners coming from deep. It's not as basic as throwing guys up front; you want to pull defenders out of position.

"Gordon Strachan will be happy if we keep a clean sheet, dominate possession and win by four or five goals."