Norwich City kept the pressure on the Championship's top two as Bradley Johnson's second-half goal was enough to beat Brighton.

Johnson stuck for the 11th time this season, hammering in substitute Nathan Redmond's cut-back with an hour gone.

It came after a good spell for the Seagulls, with Joao Carlos Teixeira coming close for the hosts.

But the Canaries temporarily moved up to third in what is becoming a remarkable race for promotion.

With leaders Middlesbrough beating Wigan, second-placed Bournemouth drawing at Ipswich and fourth-placed Watford to play later in the day, the top four are separated by just three points. 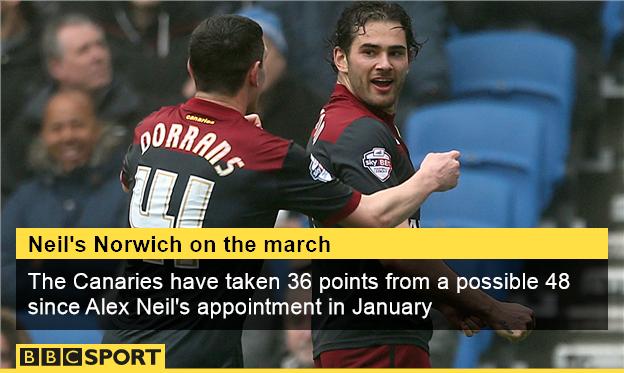 Norwich were 11 points adrift of the summit when Alex Neil took over at Carrow Road in January but, such has been their resurgence under the 33-year-old-Scot, they are now just two points behind Boro.

This was a first encounter against his former club for Brighton manager Chris Hughton, who was dismissed by the Canaries before their relegation from the Premier League last season.

And while Hughton has succeeded in pulling the Seagulls away from the relegation zone, his side could have taken a step closer to making safety a formality had they been more clinical in front of goal.

City had started like a side beaten just once in their previous 12 games, and forced early saves from David Stockdale through Johnson and Wes Hoolahan.

But Brighton, who had not lost any of their last four at the Amex, grew in confidence, with Teixeira putting a glaring chance wide after Sebastien Bassong gave away possession.

The home side's positive spell continued into the break, but Rohan Ince, Chris O'Grady and Teixeira failed to put away opportunities.

Redmond's introduction after the break paid dividends within just five minutes, as the winger sped past Joe Bennett before rolling across for Johnson to finish.

And even though Brighton penned Norwich back, visiting keeper John Ruddy was rarely troubled.

"After the first 20 minutes I thought we really came into the game, got into some good positions - most of them falling to Joao Teixeira.

"But they are the margins in the game. The real bit of quality that they showed turned the game for them."

"I wanted Nathan Redmond to come on, make the difference and win the game for us and that's what he did so I was delighted.

"Although we didn't play at our best today we still managed to win the match - and that is pleasing.

"We're going to have to win ugly and do whatever it takes to go home with the points.

"With our work-rate, determination and effort I thought we deserved to win. But I still think there is more to come."