Birmingham edged towards securing their Championship status with a hard-fought victory at home to Rotherham.

Gary Rowett's side were 2-0 up by half-time through goals from on-loan Robert Tesche and Clayton Donaldson.

Matt Derbyshire pulled one back early in the second half to spark a much-improved effort from the Millers after the break.

Derbyshire had a strong penalty claim ignored and Jordan Bowery went close, but the hosts held on.

The result left Birmingham 14 points above the relegation zone in 15th with seven games remaining, while Rotherham manager Steve Evans was left to mull over a fourth straight defeat.

Evans could barely contain his fury after his side's failed penalty claim, later labelling it "the worst refereeing decision I've ever seen."

Their poor run leaves the Yorkshire club fourth from bottom and four points above Millwall immediately below them.

Birmingham had not won in their previous three outings but were the better side in the first half, carving out several chances before eventually going ahead. 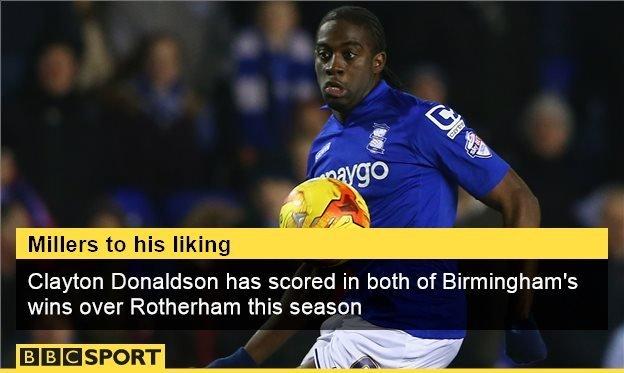 German midfielder Tesche, who moved to St Andrew's on loan from Nottingham Forest in March, scored his first for the club after a neat exchange with Donaldson.

The lead was doubled when Donaldson headed in the rebound for his 13th of the season after Rotherham keeper Emiliano Martinez had palmed away David Cotterill's free kick.

Derbyshire, who spent the 2010-11 season with Birmingham, reduced his old club's lead with a tap-in just after the resumption, and was involved when Rotherham had a penalty appeal ignored.

He tangled with Rob Kiernan when bearing down on goal, but referee Dean Whitestone was unmoved by the away side's protests.

The ex-Blackburn striker went close with a header and substitute Bowery forced a save, while Tesche spurned two late chances to give Birmingham a more comfortable-looking scoreline.

Birmingham manager Gary Rowett on Rotherham's penalty claims: "I've watched it back three or four times and I actually don't think it was a penalty, in my opinion.

"I can understand why Steve would want it given but I've watched it and the legs tangled but I don't think there was a clear foul by anyone, plus the ball is running away. I'm sure Steve will say I said otherwise."