Substitute Kenwyne Jones struck on his Bournemouth debut to salvage a point away to Ipswich Town.

The striker, on loan from Cardiff, had been on for just over three minutes when he headed in from a corner.

Freddie Sears had put the home side ahead early on, and goalkeeper Bartosz Bialkowski had preserved their lead with several important saves.

The Cherries pressed for a late winner with Bialkowski saving deep into added time but had to settle for a point.

Trinidad and Tobago international Jones had admitted to being "surprised" by his move from south Wales to the south coast having scored 13 times.

But his deft header could prove to be vital in Bournemouth's bid to be promoted to the Premier League for the first time. 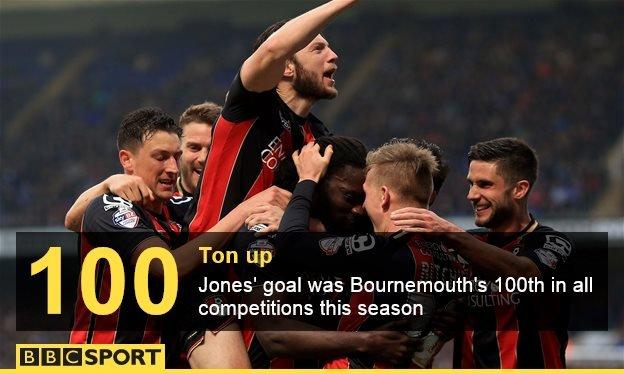 They had been replaced as Championship leaders by Middlesbrough earlier in the day, and the draw at Portman Road kept them in second place with Watford also drawing at Derby later in the day.

Ipswich - who went briefly into the play-off places before Derby's point took them back into the top six - were ahead after just six minutes when Sears found the top corner for his fifth goal since joining from Colchester in January.

The ex-Southampton, Sunderland and Stoke striker cleverly guided Ritchie's corner past Bialkowski, who prevented Bournemouth enjoying a dramatic win with a brilliant save to deny Yann Kermorgant in injury time.

Ipswich manager Mick McCarthy: "I can't honestly say it wasn't a fair result, they had a lot of the game. That said, of course I am disappointed to concede like that.

"They put on a very expensive acquisition (in Jones) and maybe he has started to pay some of that back with that goal.

"There is an irony that we are meant to be a direct, long ball team and they put someone on and launch it to him to score."

Bournemouth manager Eddie Howe: "Kenwyne is always going to be a presence but he is more than that - he has good feet.

"He can be very important for us and he scored a very un-Bournemouth goal if you like.

"I was delighted as we don't come back from losing positions very often but I still think we should have won the game, had we been more clinical in front of goal."