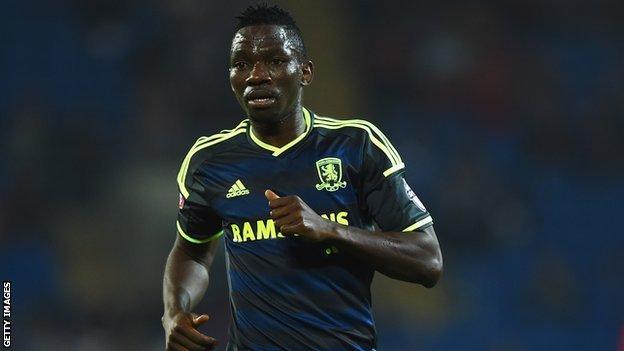 Defender Kenneth Omeruo says he will be ready to play at Chelsea when he returns from his loan to Middlesbrough.

The 21-year-old Nigeria international, who joined the Blues in January 2012, has been at Boro since January 2014.

He told BBC Sport: "I've gained great experience and wait for the chance to be in the Premier League next season.

"I'm confident I can break into Chelsea's first team at some point. Chelsea knows that too, if not I wouldn't have a long-term contract."

Omeruo has come a long way since joining the Stamford Bridge outfit from Belgian side Standard Liege - developing on loan at ADO Den Haag in Netherlands in an 18-month spell from 2012 to 2013, becoming an international regular and making his mark at Boro.

The centre-back was first called up by Nigeria in January 2013 and he went on to play at that year's Africa Cup of Nations, helping the Super Eagles win the trophy, and at the World Cup the following year.

At that time he was also starring at English Championship side Boro, who he joined in January 2014. He made 14 appearances in his first loan spell and after agreeing another season-long loan deal at the club he has been a key player in the current campaign to help Boro push for promotion.

With the team third in the table, behind Watford on goal difference and a point behind leaders Bournemouth, Omeruo believes earning a place in the top-flight next season is within their power.

"We have been doing good the past few weeks. There are some games we could have done better but we are still in third place," he said. "We are looking forward to the next game and giving our best. Everyone knows in the club the target is to win the league or be second.

"I am confident we will get promotion."

Playing in England's second tier has toughened Omeruo and he describes the league as the most difficult in the country.

"If you look at the teams who were relegated last season from the Premier League, they are struggling to get to the play-offs positions. So that tells you how hard the league is. It is a strong, physical league and you have to always be mentally ready," he said.

While the experience must have held Omeruo in good stead for when he returns to his parent club, he admits there is still a lot to learn.

"I still have to take things step by step," he said. "I have to stay focused on Middlesbrough and help the team the best way I can."