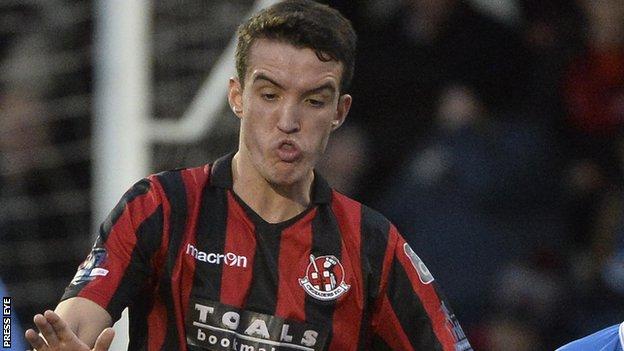 The pair were suspended for last weekend's Irish Cup semi-final against Glentoran which saw the Crues' double hopes disappear in a 1-0 defeat.

"The boys were disappointed last week but overall they have been exceptional this season," said the manager.

"Some players know they did not perform, but they have been the main men for us this season

"They got us to where we are and it is up to them to dust themselves down and fight for that prize.

"There is a long way to go and a six-point lead can be snuffed out in two games."

Emmett Friars, Barry Molloy and Chris Morrow are expected to miss the match because of injury.

Coleraine will be without attacking midfielder Matthew Snoddy as he is on loan from the Crues.

Crusaders have already beaten Coleraine three times this season, including a 6-2 success at the Showgrounds back in September.

Saturday's fixtures are the last before the end-of-season split, but the top and bottom halves have already been settled, with sixth-placed Glenavon 11 points ahead of Coleraine in seventh.

Linfield, in second place and six points behind Crusaders, will be without suspended midfielder Jamie Mulgrew for their game against Glenavon at Mourneview Park.

"It is a tough one because Glenavon are a good team but we have to make sure we are right in there behind Crusaders," said Blues boss Warren Feeney.

"The pressure is on Crusaders and it is in their hands, but we have to make sure we win our games."

At the bottom of the table, Institute's battle for survival sees them travel to outgoing champions Cliftonville.

Paul Kee's strugglers are likely to be without striker Darren McFadden who picked up a calf injury playing for the reserves, but fellow front man Robbie Hume has recovered from a hamstring problem.

Institute, facing a return to the Championship after one season back in the top flight, are four points adrift of one-from-bottom Warrenpoint Town.