After days of speculation about if and when Harry Kane would make his England bow, it took the Tottenham striker only 79 seconds, three touches and one header to mark his international debut with a goal.

The 21-year-old was called into Roy Hodgson's squad for the first time after scoring 29 goals for his club and continued his scintillating form against a poor Lithuania team at Wembley. 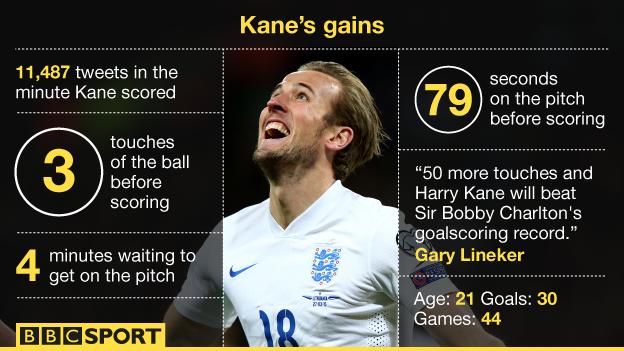 Kane headed home at the back post from Raheem Sterling's cross to score the Three Lions' final goal in the 4-0 Euro 2016 qualifying Group E victory.

Here's how football fans, the media and fellow players responded.

England manager Roy Hodgson: "It's a bit of a fairytale but it's nice when fairytales come true and it has come true for Harry. He has had a wonderful season and crowned his debut with a well-taken goal."

England captain Wayne Rooney: "It's a great lift for the nation. He's scoring goals in the Premier League and now he's doing it at international level. We're all excited to have him with us and we want him to do well."

Kane: "I'm just proud. A dream come true. It's a special night and definitely one I won't forget. It's what you dream of as a kid, it's a bit of a daze and enjoying every minute of it."

Chris Waddle on BBC Radio 5 live: "It's all about next season for Harry Kane. He's had a great season, you cannot argue with what he's done. This season he looks the real deal, this kid."

Danny Mills on BBC Radio 5 live: "The script was written. What a start for him, what a night."

It may have been a European qualifying match, but Harry Kane's fairytale debut sent shockwaves around the world via Social Media.

Tweets mentioning Kane were registered from the heights of the Himalayas in Nepal, along the earth's dividing line in Equatorial Guinea and even to Islands in the South Pacific.

The Tottenham forward headed home less than 80 seconds after coming on and his elation was matched by his fans, with 11,487 tweets mentioning his name in the minute surrounding the goal.

If Harry Kane was an unknown quantity outside of the UK today, he certainly isn't any longer.

Some famous names shared Kane's magic moment and it did not take long for a host of Harry-related memes to pop up.

One Direction singer Louis Tomlinson tweeted: "That's why football is such a great game! Get in Harry Kane!!!"

Manchester United defender Luke Shaw tweeted: "Congratulations to @hkane28 for your debut and of course the goal."

How some of Saturday's newspapers reported Kane's feat.