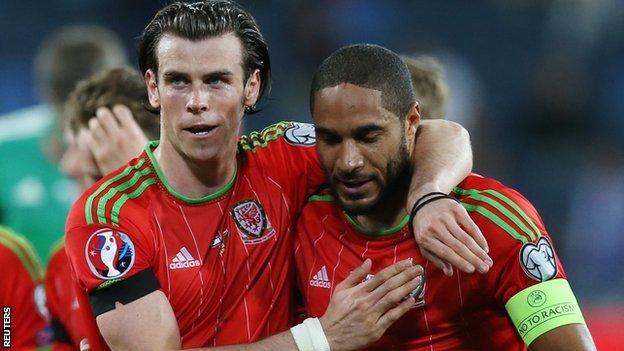 More than half a century has passed since Wales last qualified for a major tournament, but the momentous 3-0 win in Israel was a significant step in their quest to end that barren spell.

A hugely significant result in terms of their hopes of qualifying for Euro 2016, it included another memorable international display from Gareth Bale and a moment of sweet vindication for manager Chris Coleman.

The victory in Haifa also sets up a fascinating match against group favourites Belgium in June, which could be another crucial junction on the road to France.

A result beyond Wales' wildest dreams

Wales' only appearance at the finals stage of a major competition remains the 1958 World Cup - and it was a play-off win against Israel that sealed their passage to Sweden.

Coleman had described Saturday's match against the same opponents as their most significant since a European Championship qualifying play-off defeat by Russia in 2003 - and his players rose to the occasion in spectacular style.

Back in 2003, Joe Allen was a disconsolate 13-year-old fan at the Millennium Stadium as Wales squandered a precious draw in Moscow by losing the return leg 1-0 in Cardiff.

The Liverpool midfielder said the anguish of such near misses was a motivation for the current side, and Allen was one of Wales' leading lights in Israel.

The hosts started the game as Group B leaders having won their first three matches, their confidence boosted by the knowledge they had not lost a competitive match at home since 2012.

Their fans created an intimidating atmosphere at the Sammy Ofer Stadium, greeting every Welsh touch with whistles and jeers.

But the deafening din turned to solemn silence as Bale and his team-mates produced one of the finest performances in recent Welsh football history.

The manner of the win was surely beyond the expectations of even the most optimistic of fans, especially given captain Ashley Williams said before the game a draw would be a decent result.

Wales stand proudly at the summit of Group B and have a golden opportunity to end their wait for a place alongside football's elite.

For the first time since 1976, they are unbeaten in five games in a single qualification campaign, and there is belief coursing through the veins of players and fans alike.

Wales' travelling contingent of about 950 supporters enjoyed a riotous party in their corner of the stadium, chanting "We are top of the league'" as they saluted the players on the pitch, all high-fives and ecstatic embraces.

"Wales' performance was disciplined, it was professional and I'd almost say it was faultless," said former Wales striker John Hartson. "They won 3-0, but it could have been five or six."

Israel manager Eli Guttman joked before the match that Bale had been saving his best form for Wales. And whether he meant it or not, it seems Guttman was right.

Whenever and wherever Wales are in action, Bale is invariably the centre of attention. As the world's most expensive footballer, it goes with the territory.

But the scrutiny has been intense of late, with Bale enduring a turbulent few weeks at Real Madrid.

Despite the fierce criticism from fans and media - and even having his car attacked by Real supporters - Bale seemed unaffected as his two goals inspired a memorable win for his country.

Given the licence to roam in a central attacking position behind striker Hal Robson-Kanu, Bale ran at Israel's back-tracking defenders at every opportunity.

He was a constant threat, drawing the two fouls that saw Eyan Tibi sent off and striking fear into Israel's players and supporters every time he touched the ball.

"He looked happy," said Hartson. "He is vitally important to Wales, and he's loved and he's appreciated. When Gareth Bale is in that form, he is unplayable."

Coleman got his tactics spot on

There was something very telling about the banner at Sammy Ofer Stadium that read "Coleman's Red Army" alongside a picture of Wales' manager.

It is not uncommon for a coach to be the subject of such adulation - but this gesture from the Welsh fans represented a remarkable turnaround for Coleman.

He was jeered by supporters during an unconvincing 2-1 win in Andorra at the start of the campaign, a disjointed display in which tactical tinkering appeared to hamper the team's balance.

A switch from a 4-5-1 formation to 5-3-2 did not prove effective, while the substitution of Simon Church in the second half left Wales without a recognised striker as they chased a late winner.

Coleman has, however, won over some of the sceptics in subsequent matches, most notably the goalless draw in Belgium in November.

That was an exemplary show of tactical discipline and resolve, Wales' back four and five-man midfield shackling the threats of players such as Chelsea's Eden Hazard while preserving Bale's counter-attacking threat.

Those defensive qualities were evident again in Israel - but this time with the pivotal addition of potent quality in the opponents' half.

Coleman's switch to a 5-3-2 formation - which had looked cumbersome in Andorra - worked brilliantly in Haifa.

The defence was solid and balanced, the midfield dominated possession and Bale's roaming role in attack allowed him to wreak havoc in the Israeli half.

This was a superb victory and, for Coleman, glorious vindication.

Summer showdown with Belgium a tie to relish

Group B was wide open even before Wales leapfrogged Israel at the top - and the win in Haifa makes Wales' match against Belgium on 12 June all the more mouth-watering.

Although Bosnia-Hercegovina are technically top seeds, it was World Cup quarter-finalists Belgium who were expected to dominate Group B.

They have an abundance of world-class players, and the likes of Hazard and Vincent Kompany will be aiming to clip Wales' wings when they travel to Cardiff.

Belgium, who beat Cyprus 5-0 on Saturday, have already been frustrated once by Wales in this campaign so they will be eager not to lose any more ground.

The Cardiff City Stadium should be packed and at full volume for Belgium's visit, and Wales demonstrated in Haifa they are a team who can rise to the fiercest of challenges.

"I have to say that I think Wales can qualify," added Hartson. "They've got Andorra at home, and if they can then perform like this in Bosnia, they have a chance there.

"The game against Belgium will be difficult. Belgium have ridiculously good players, but I would say yes, Wales can do it. They've proved a lot of doubters wrong with this comfortable 3-0 win."