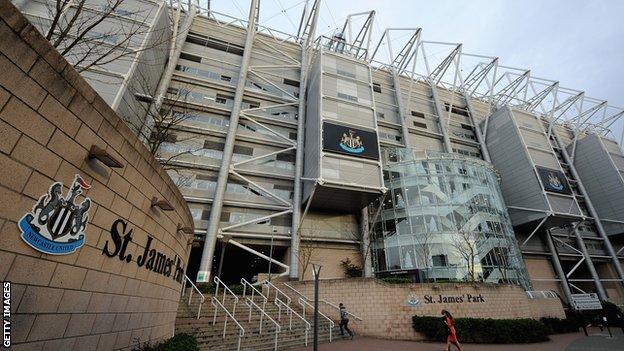 Newcastle United have announced a record annual profit of £18.7m for 2013-14, the fourth consecutive financial year they have made money.

The Premier League club's debt remains at £129m, which they say is an interest-free loan from owner Mike Ashley.

"The club benefits from a supportive owner and is financially stable," said managing director Lee Charnley.

"This gives us a strong platform from which to grow, on and off the pitch."

He added: "A result of which means, as we move forward, we are able to net spend on the playing squad and invest in other areas of the business."

The Tyneside club, who are currently 12th in the English top-flight, say a growth in their commercial revenue has helped increase after-tax profit to £18.7m from £9.9m in 2013.

An operating profit of £4.7m was recorded for the year ending June 2014, up from operational losses of £0.6m in the previous 12 months.

In October 2013, hundreds of Newcastle fans marched through the city to protest against the way Ashley was running the club.

"With our commitment to keeping ticket prices affordable for our supporters growing our commercial income has been crucial," added Charnley.

"We believe financial stability will deliver positive on-field results for the club."

But there was a drop of £1.9m in matchday revenue, which includes ticket sales and hospitality.