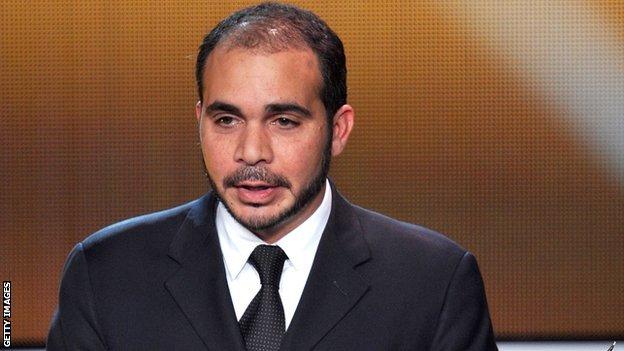 Fifa presidential candidate Prince Ali Bin Al Hussein is hoping his trip to Zimbabwe will win him support from Africa for his election campaign.

The 39-year-old Prince Ali, a Fifa vice-president, is one of three challengers to incumbent Sepp Blatter for world football's top job.

Africa makes up 54 of the 209 Fifa member countries that will vote in the election in Zurich on 29 May.

"I hope I will get support from all of Africa," Prince Ali told BBC Sport.

"I also come from a country and a region developing at football so my project is to develop talent and take it to world class level and that is the reason I am in Africa, in particular, and why I am running to be Fifa president."

Next week he will travel to Cairo for the Confederation of African Football's general assembly meeting, which will also be attended by fellow presidential challengers Michael van Praag and Luis Figo, as well as Blatter.

The 79-year-old Swiss Blatter has a strong base of support in Africa, where he is still viewed as responsible for helping to deliver the first World Cup to Africa - the 2010 finals in South Africa.

He is seeking a fifth term in office to continue a reign that began in 1998.

Africa is a key battleground if any of the candidates are going to unseat Blatter, who is the clear favourite to win the election and retain his job.