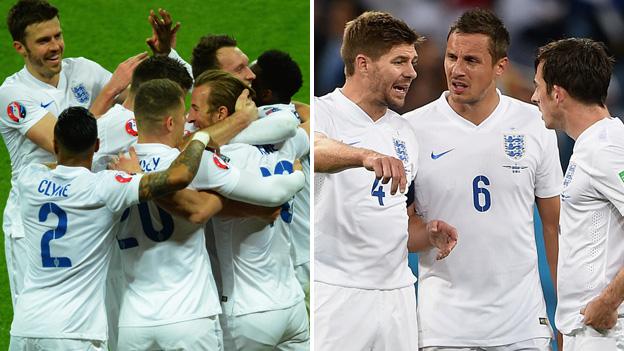 England's progress - when measured by results alone - has been smooth since they made an embarrassing retreat from Brazil last summer after going out of the World Cup at the group stage.

Before Tuesday's 1-1 draw with Italy in a friendly in Turin, Roy Hodgson's side had undergone a comfortable rehabilitation with seven straight wins, including five from five in the Euro 2016 qualifying campaign.

It all points to a period of improvement after that debacle in South America.

So, have England really improved since they concluded the World Cup campaign with a goalless dead rubber against Costa Rica in Belo Horizonte on 24 June last year?

Hodgson has been gifted a talented generation of young players to mould for the future, with Euro 2016 in France the first serious test.

In Turin, 21-year-old Ross Barkley was described by Hodgson as "a game changer", while the manager gave a first full England start to Tottenham's prolific striker Harry Kane, who is the same age as the Everton prodigy.

Barkley may still have questions over his decision-making but his bold, strong running offered England an extra dimension.

Kane was up against some tough opponents in the likes of Giorgio Chiellini, who unceremoniously flattened the striker in the game's opening passage of play, but he showed maturity and strength of character that will have impressed Hodgson.

Liverpool's Raheem Sterling may be the brightest star of all at just 20 if he can put his contract wrangles behind him and settle his future.

Hodgson may also look to harness members of England's promising under-21 squad who had such a fine victory over Germany in Middlesbrough on Monday, players such as Burnley striker Danny Ings and Southampton midfielder James Ward-Prowse.

The manager, sometimes criticised as over-cautious and too much of a member of the old guard to relate to youngsters, must show he can work successfully with them.

Case for the defence

When England went out of the World Cup, they were accompanied by confirmation that defensively they were simply not good enough against high-class opponents. It was a flaw ruthlessly exposed by Uruguay's Luis Suarez in what proved to be a defining defeat in Sao Paulo.

Have things improved since? Despite those perfect results in qualifying, the suspicion lingers that it is still England's Achilles heel.

Chelsea's Gary Cahill is a mainstay, but the jockeying for position alongside him continues between the likes of Everton captain Phil Jagielka, Jones and Smalling. Everton's elegant Stones looks the best long-term answer but there is still no convincing first-choice partnership.

At left-back, Leighton Baines was found wanting in Brazil, while injuries have held Shaw back. Arsenal's Kieran Gibbs, Danny Rose of Tottenham and Southampton's Ryan Bertrand are in contention but have yet to make any firm case for selection.

An outside bet, might be Baines' understudy at Everton, Luke Garbutt. The 21-year-old is confident, accomplished and key to England's under-21 plans. He is out of contract in the summer and although manager Roberto Martinez insists he will sign a new deal, there will be a scramble if he does not.

Southampton's Nathaniel Clyne and Tottenham's Kyle Walker are the main contenders at right-back - we can forget Liverpool's Glen Johnson - but they are way short of proving themselves at the highest level.

Joe Hart is a given in goal, but it remains to be seen how it shakes out in front of him.

Hodgson has the players to allow him to adopt various systems. Sterling can play wide, centrally and at the tip of a midfield diamond, while captain Wayne Rooney and Kane can drop deep as well as playing as the main striker.

Rooney, as ever, is the centrepiece of England's plans and evidence this season has shown he must play as a striker. He is his country's most reliable goalscorer and no other nation would move a player of such stature and statistics around to accommodate others.

Arsenal striker Danny Welbeck, such a success with six goals in Euro 2016 qualifying, can play up front or wide, while the lingering hope that Liverpool's Daniel Sturridge can offer another attacking weapon continues to be frustrated by his fragile fitness record.

One thing can now surely be consigned to the tactical dustbin - using Jones in a defensive midfield role as, to use Hodgson's word, a "destroyer." It did not work against Italy and will never be successful against quality opposition.

Michael Carrick showed his enduring composure and ability to dictate tempo in his substitute appearance, so maybe he will now get a run of games. When the Manchester United midfielder was on the pitch, England looked far more controlled and in total they completed 530 passes, 191 more than Italy.

Hodgson used Sterling at the point of the midfield diamond in the opening Euro 2016 qualification win in Switzerland - with Arsenal's Jack Wilshere at the base - so there are plenty of formats for him to work with.

He must now assemble the pieces correctly, which was not the case in Turin. Jones should never been seen again in that holding role, while Arsenal's Theo Walcott was utterly miscast as a forward attempting to dovetail with Kane. That is Rooney's job.

Euro qualifiers can be deceptive

England's stroll towards Euro 2016 in the most favourable of qualifying groups may offer a false impression of well-being. They have recorded victories against Switzerland,San Marino,Estonia,Slovenia and Lithuania. But so they should.

The group serves as the perfect device to allow Hodgson's side to regroup, recover and rebuild confidence but it is not a serious gauge of whether they have recovered from that traumatic World Cup.

Italy did not provide a true test because their side was makeshift, but other proposed friendlies against Spain, Germany and the Netherlands could be just the job - or the sort of cold shower that reminds England of their real place in the world order.

The notion of Hodgson receiving a new deal to take him through to the World Cup in 2018 has been floated but, as both the manager and the Football Association have said, there is no rush.

Remember how Fabio Capello signed a new, amended contract committing him to the job until Euro 2012 while almost on the steps of the plane to South Africa for the World Cup in 2010?

Cue a thoroughly miserable farce of a campaign based at the austere "Camp Capello" in Rustenburg and a loveless marriage with the FA until he resigned over the decision to strip John Terry of the captaincy in February 2012.

So, no rush. Why commit to Hodgson (or indeed why should he commit to the FA?) until judgement can be made on the Euro 2016 campaign.

@aidanwilliams44 Should Rooney be accommodated in midfield again?

In my opinion never, Aidan. He is England's main striker, most reliable goalscorer and wasted in midfield. Just look at Manchester United this season. He is a striker and an outstanding one. Play him there.

@loudeani Did Ross Barkley show enough to prove he has what it takes to lead England in years to come?

He is not captaincy material but Barkley is a massive talent and can make a big contribution. The slight problem he has is that his best position is the number 10 and there could be various contenders for that role, such as Sterling and Rooney. What I am certain about, though, is that he has a massive England future.

@olliemetcalfe Does Daniel Sturridge walk back into the side?

Absolutely not, Ollie. In fact, his fitness is so unreliable I would not count on him at all. He now has to compete with the likes of Welbeck and Kane so he is not an automatic choice and has got a real fight on his hands.

@_WrightJosh Where does "The Jones Experiment" rank among England's biggest blunders?

I'm sure there must have been worse, but let's hope we never see its like again. It has been tried, failed and let's quietly put it away.

@LiamS28 Will Walcott ever come good at this level?

It's been a long time, Liam, and he still has not fulfilled his potential so there must be doubts. In his defence, I believe he was totally misused in Turin. He is a wide player for England so that was 55 minutes of his international career he will never get back.

No-one is - or should never be - undroppable, John, but no-one has ever come anywhere near an argument that makes me think England would be a better team without Wayne Rooney in it.